Yesterday I posted on my page that I would be doing an inspiring photo-shoot.

Allow me to explain:

A few weeks ago I started talking to a guy called Mark Smith, a former Grenadier Guard. During a training exercise in Canada in 2011, Mark's leg got battered with bullets. Despite 24 operations and 10 weeks in the hospital, medics had no other option but to amputate.

Mark joined the Army at the age of 18. The Army and his regiment is and always will be a massive part of his life. After 10 years service he returned home and soon reality hit, the army was his life and he knew nothing else. He needed more, something to occupy his time and help him feel alive again. Whilst going through his rehabilitation at Headley Court, he became a qualified Football coach, Boxing coach and a Personal Trainer. Although he loved Football and Boxing, not being able to join in and having to stand on the sidelines didn't give him the same buzz.

Then he read about Hercules Olympia, a competition that  included a disabled bodybuilding category. This grabbed his attention. One thing led to another and he started training and entered his first competition (Pure Elite).

Bodybuilding gave him a reason to get up in the mornings and brought back drive and motivation in his life. With the support of his wife, family and friends he once again has a passion.

On 2nd November 2014, 5 months after starting training , he stepped up on stage and brought home his first victory. The response from the crowd was incredible and convinced him to keep going. From there it has spiralled beyond belief.

He started up a page to raise interest in Disability Bodybuilding. Prior to reading about the Hercules Olympia, He had heard very little of disabled bodybuilding.

After reading his story I wanted to do a Photo-shoot with this guy. What an inspiration to many people out there! Mark agreed to dive into the studio and create some cool images.

Next week, Mark is flying to America to compete in the Phil Heath Classic. I wish him every   success! I think I'll be working with Mark again very soon. There seems to be a high demand for a Mark Smith Calendar... We have briefly discussed this project and are hoping to donate proceeds to a charity.

If you want to follow Mark and his adventure : 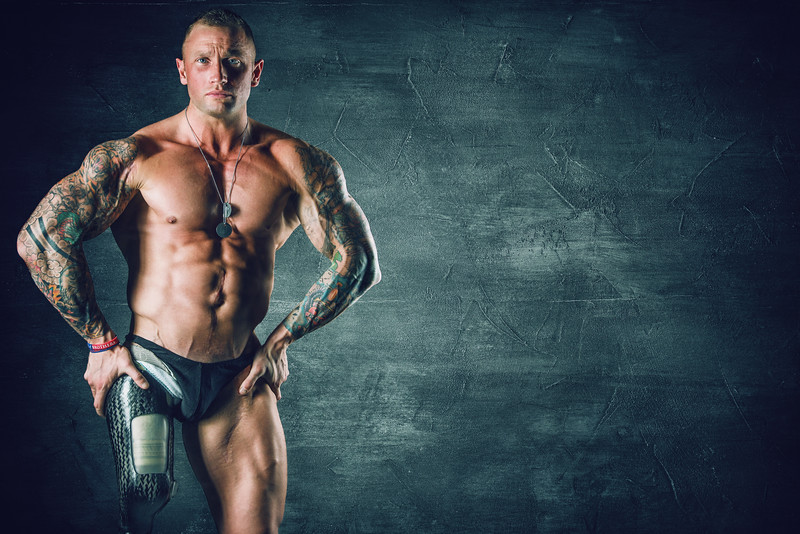 Photoshop teacher based in the UK